In 2000, the Countryside and Rights of Way (CRoW) Act was introduced and officially gave a cut-off date for adding historic paths to Definitive Maps. Here is the link to the Cambridgeshire interactive map: My Cambridgeshire map.

However this map is just a guide and not the legal record. The Definitive Map is the legal record and is held by Cambridgeshire Council, but unfortunately it is not available online. It can be viewed by appointment, so a member of the Parish Council will go and see this map in the next few weeks to confirm whether it matches the current interactive map.

The Act’s cut-off date means that paths (specifically footpaths and bridleways) which may have existed for some time, but which are not recorded on local Definitive Maps, will be extinguished on 1st January 2026.

If they are not officially recorded by this date, people will no longer be allowed to use them. There are currently 49,000 miles of potential unrecorded rights of way in the UK.

If we wish to keep these rights of way after 1st January 2026, we will need to do the following:

If you know of a local historical path in the area covered by Wilburton Parish Council that you think should be added to the Definitive Map, please contact the Parish Council so we can investigate.

UPDATE: On 16th February 2022 the UK government announced that the 2026 deadline to register historic paths is to be abolished in England. The DEFRA statement said that they will repeal the 2026 cut-off date for recording historic rights of way, as set out in the Countryside and Rights of Way Act 2000, to allow more time for paths to be identified and added to the public rights of way network. Although this is good news, if any historic footpaths need to be registered, this will still need to be done.

Gill Spencer is our lead Councillor for rights of way.  You can contact her on gspencer@wilburtonparishcouncil.org 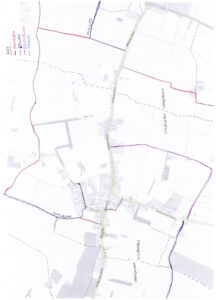